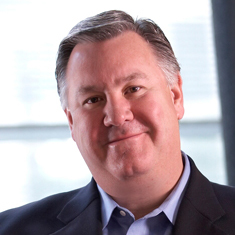 The American Transaction Processors Coalition (ATPC) is proud to announce that it has elected a new Board of Directors Chairman, Royal Cole. Royal is currently Executive Vice President and Head of the North American region for Worldpay under FIS and brings with him more than 30-years of payments industry experience. The very recent consolidation of Worldpay into FIS created the world’s largest Fintech enterprise. Royal leads FIS’s merchant acquiring business out of Denver, Colorado. Prior to nearly a decade with Worldpay, Royal worked at Western Union for 18 years where he was responsible for strategic development of the Global Payments Services Group and led the North American Distribution Network organization.

Royal formerly served on the Board of Directors of the Washington, D.C. based Electronic Transaction Association (ETA), and was then recruited as the Vice Chairman of the Atlanta-based ATPC in 2018. As Vice-Chair, Royal worked closely with the ATPC team and former Chairman Bruce Lowthers (President of Banking Solutions at FIS) to execute on key initiatives, including the P20, the ATPC’s multi-state expansion strategy, the inaugural ATPC Future Leaders program, and preparing for the 2020 Transaction Alley Cyber Forum. Royal plans to continue this hard work and dedication to representing the interests of the payments processing industry and its vital role in the economy throughout his two-year term as Chairman. He also looks forward to serving not only as an industry evangelist, but also as an educator providing insights and resources to help arm our local, state and federal politicians with the facts and information necessary to make the best decisions.

There was great change to the industry landscape in 2019 including the consolidation of large payment processors, the expansion of industry disruptors fueling new technologies, and regulatory dynamics. As the new Chairman of ATPC, Royal  plan to adapt the organization to this new landscape, making it even more relevant and consequential to both industry and government stakeholders.

Royal grew up in New Jersey and attended La Salle University in Philadelphia. While currently based in Denver, he also spends time in Atlanta, Cincinnati, Jacksonville, New York and London.

The ATPC, headquartered in “Transaction Alley,” is a non-partisan, public policy coalition dedicated to protecting, preserving, and promoting the interests of the rapidly growing Transaction Processing industry. “Transaction Alley” is home to more than 100 FinTech companies in metro Atlanta that form the hub of American payment processing. These payments companies have IT infrastructure, offices, and production/distribution facilities in every state in America and around the globe, and our organization works to educate elected officials on their behalf in each locale.